Gdevelop: How to manually export to android or ios using Cordova

We will see how we can export Gdevelop project as a Cordova project and build it using a cordova by ourselves locally on our computer. Obviously for FREE!!. Lets get started.

I am assuming you have Android SDK installed on computer.If not then download it and install it first.

I am not covering it here as it is a general thing and you can find plenty of tutorials and also that it will make this post unnecessarily longer.

Also cordova requires node.js installed on your computer..Installing is as easy as downloading the installer and running. Link : https://nodejs.org/en/

After installing the node.js. Open the the node.js command prompt and type command,

This will install cordova on your computer in few minutes.

First Export your Gdevelop project as a Cordova project. 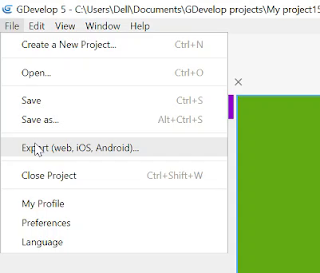 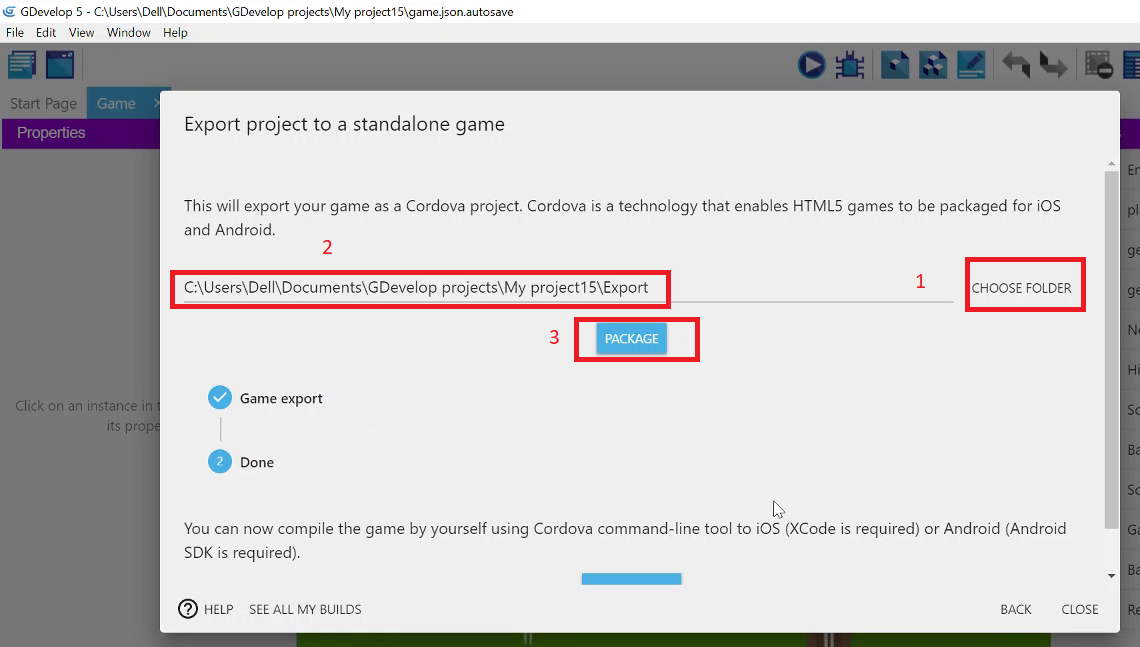 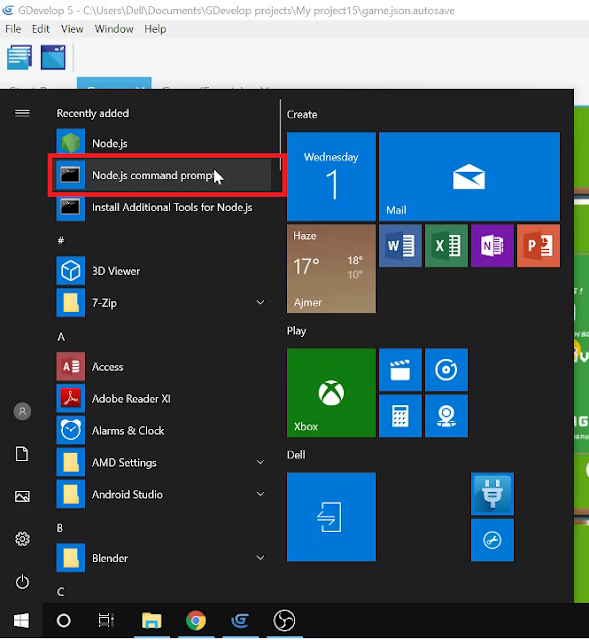 Change the current directory using "cd" command as shown below. 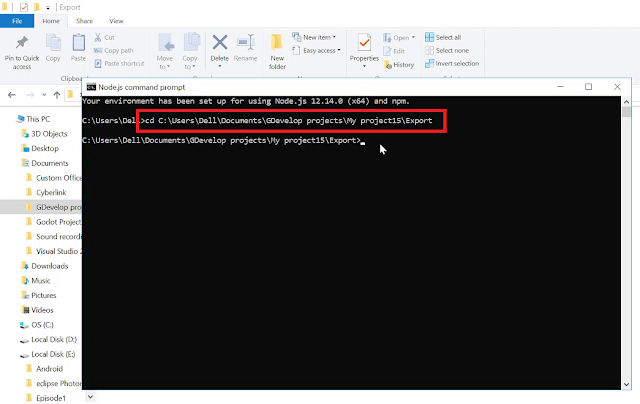 It will take some time and will create new folders on your project's directory  platforms/android (or platforms/ios for ios). It will contain project that can be imported on Android Studio or other IDEs. 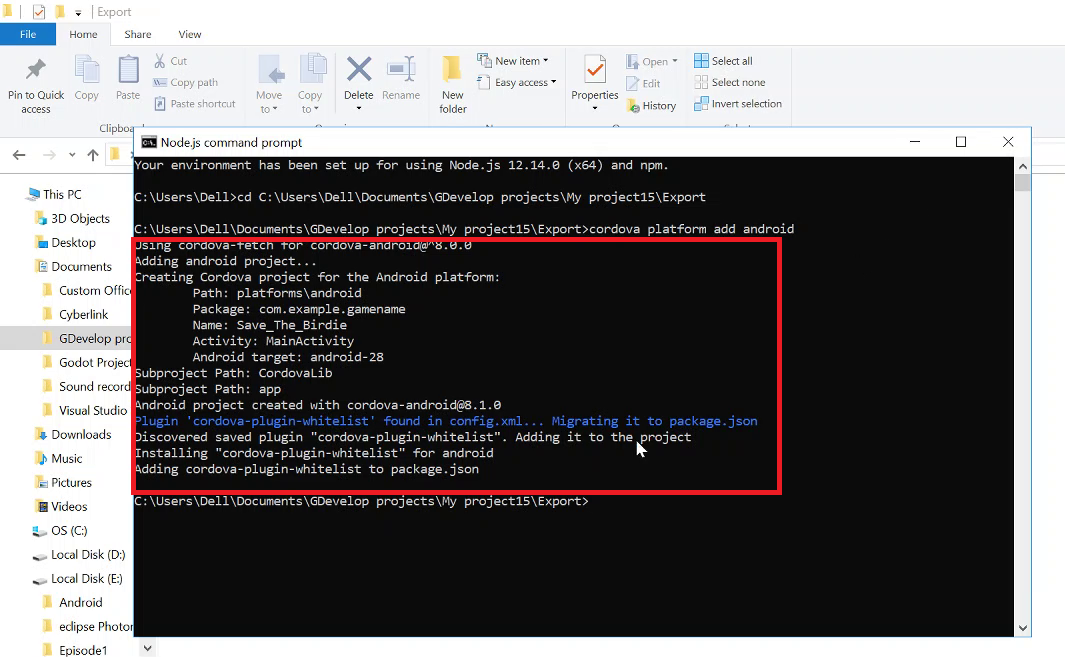 Step 4: Build It for platforms 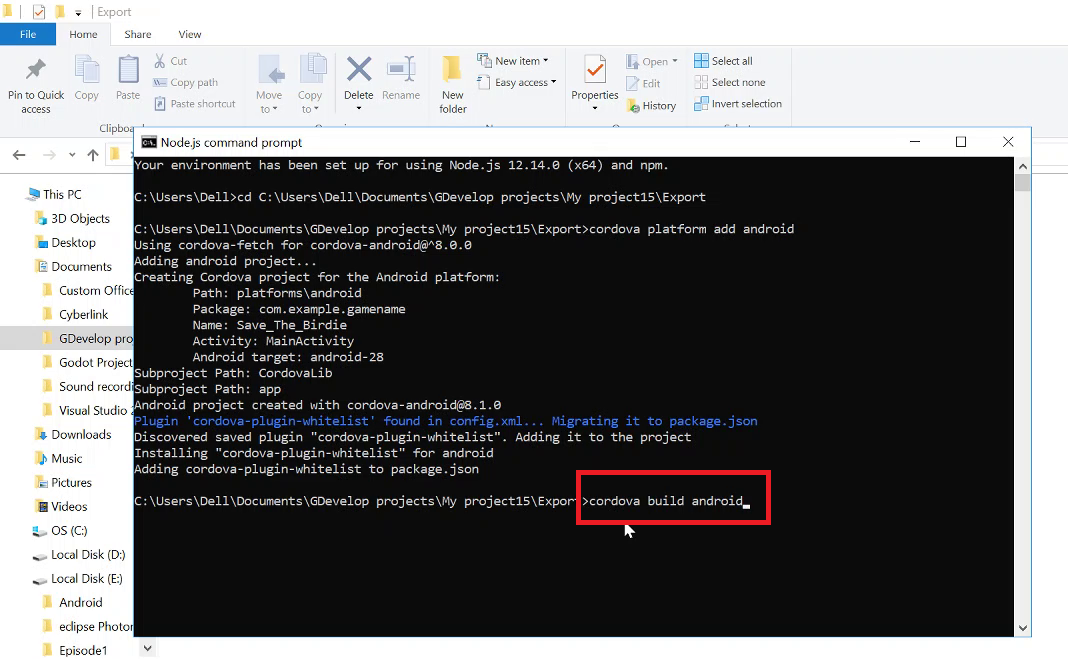 You can run your game directly from the command line if don't want to do tedious work of transferring the apk or ios executable to the your phone. There are two ways to do it.
First to emulate your device.To emulate android device run command,

Read this if you are facing difficulties, https://cordova.apache.org/docs/en/2.9.0/guide/getting-started/android/

and for ios device run command

or run the app on a specific simulator using

Second way is to run it directly on phone. I don't have an iphone so i have not tried on iphone but for android  type in command.

[NOTE: you should have adb installed and make sure usb debugging is on in developer options in
your phone.]

If every thing went right and you should be able to see the game on your phone's screen.

So, this way you can export your Gdevelop games to mobile platforms any number of times a day, that too for free. I hope it was helpful.

Popular posts from this blog

How to make Make money with Inkscape

July 01, 2018
How to make Make money with Inkscape Inkscape is a free and open source but professional vector graphics editing program for Windows, Linux and Macintosh. A Free alternative to Adobe Illustrator and is used by a lot of enthusiasts, art students and artist all around the world. Ah.. you knew this already? Right!! Otherwise why would you read this post. So here are the ways to make money with inkscape. Selling Vectors This is an obvious one but not as easy as it seems, you see there is a lot of competition, you will  hundreds of sites if not thousands for selling vectors with tens of thousands of sellers on them also it's not that you can sell anything made with inkscape you need to follow some standards.For example here is an article which might be helpful, http://sellingvector.blogspot.com/p/how-to-start-selling-vectors.html?m=1 Tutorials If you want to know more about how to sell vectors created in inkscape then you should read
2 comments
Read more

April 12, 2018
Awesome games made in Blender Game Engine Hey guys, blender game engine is great software for making games if you are an artist especially if you are familiar with blender. (--And know python--).Over the time several games have been produced using it, though I haven't played all of them but many of them are amazing piece of art. So here's the list of awesome games that you should play at least once if you are a blender user.The list is not ordered by anything. KRUM - Edge Of Darkness KRUM is hardcore story based action RPG set in a fantasy world. The player has to survive and reach the end of the story.The player will fight enemies and bosses as the story reaches to the end.The game was developed by HA Studios Ltd and is available in 9 different languages.KRUM - Edge Of Darkness is currently available on steam. Tomato jones A physics-based puzzle/adventure game. The game is set in indiana jones like environment .”The  goal is to collect all coins and the h
Post a comment
Read more

August 11, 2017
Make a HTML5 Canvas Colorful Tile Board We have already know how to draw shapes in html 5 canvas,now lets apply that knowledge to make something more interesting. We all love colorful environments. So lets create a Tile Board. The IDEA 1.)A canvas with many tiles. 2.)Each tile will have its own different color. 3.)User will have the ability to redraw the Tile Board. The IMPLEMENTATION Now we will implement the idea.Lets get started....., Lets create a simple Html 5 file. <!DOCTYPE html> <html> <head> <title>TODO supply a title</title> <meta charset="UTF-8"> <meta name="viewport" content="width=device-width, initial-scale=1.0"> </head> <body> </body> </html> Now create a html 5 canvas. <canvas width="600" height="400" id="Can" ></Canvas> Now Create a
Post a comment
Read more

October 30, 2018
Termux : Linux on Android(Without Root) Hey guys hope you all doing great, this post is little different than what i usually do but i thought it would be worth sharing it with you. I hope you find it useful and if you do tell me in the comments. Android is Based on Linux, But we cannot use it as a typical Linux distribution as Linux only forms the core part of android and Google did not added all the software and libraries as included in Linux distribution like Ubuntu or Debian. But can we have Linux like experience on the android???... well Yes and No!!. There are multiple ways to do that. Though, you may not get as good experience on a Linux distribution but very close to that. One of the and the easiest way is to use an Linux emulator for that. Termux is one such emulator that I wanted to share with you.It is a terminal emulator and Linux environment app that works directly with no rooting or setup required. It gives you a lot options for customization. Ter
2 comments
Read more

[Inkscape] : How to import inkscape SVGs in Html file

April 27, 2017
LEARNING JAVASCRIPT PART- 1  JavaScript is a very powerful, versatile, and popular programming language. Infact it is the de facto programming language of the web so you can find it anywhere from your smart phone to your pc .It was first arrived in the mid-1990s; it is grown to be one of the world's most popular programming languages. If you want to learn the web development, it is a must have learned language for you. Also it is in top 5 language to learn this year so, I have decided to start a series to cover basics of JavaScript before we move to the advance topics. Topics we are going to cover in this series are; 1.        Using JavaScript in HTML File and Browser Console 2.         Variables in JavaScript 3.         Operators 4.         Arrays 5.        Objects in JavaScript 6.         Functions 7.        Loops and Jumps 8.        The Document Object Model So in this part we are going to set up environment for learning JavaScript so l
7 comments
Read more